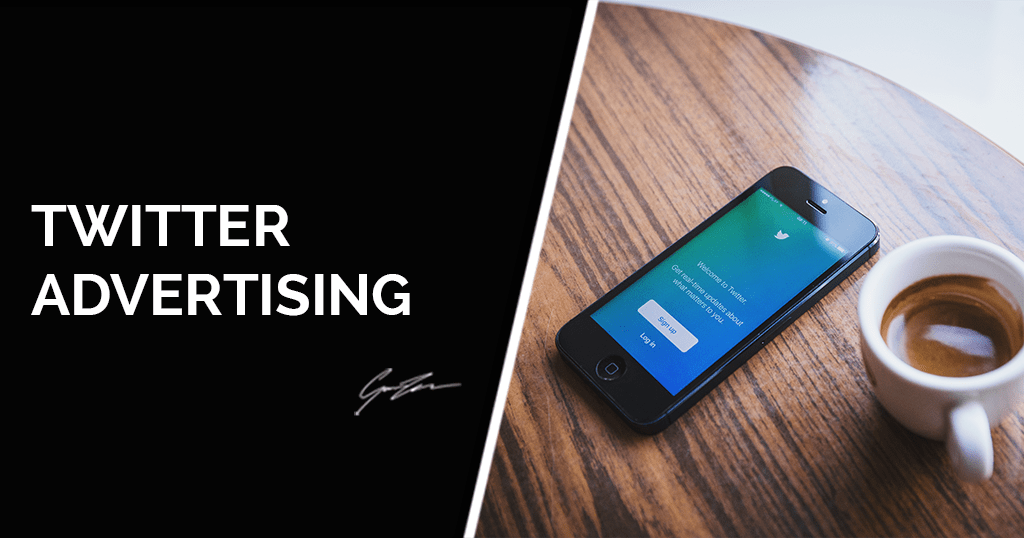 Since Twitter launched in 2006, the social network has grown to an audience of around 320 million monthly active users. There’s no doubt that Twitter is one of the biggest social media platforms, despite their struggle to attract new users.

When one thinks about social media advertising, they tend to think about Facebook ads. However, Twitter has a very powerful advertising platform, and is under-utilised by a lot of businesses and marketers.

This guide will cover everything you need to know to get set up with Twitter advertising, allowing you to set up your first campaign and attracting leads.

If you find yourself getting the: “Your account is ineligible to participate in the Twitter ads programme. Learn more about Twitter ads eligibility” message, make sure you’ve set up your profile properly (confirmed email address, profile picture, cover image, website & full bio) and start tweeting for a week or so.

Then come back and check to see if you’re able to sign up for ads.

If you’re just starting out on Twitter or you’re launching a new brand, increasing your following is going to be one of your main concerns. You can also use this type of ad to target people in your target market,

Follower campaigns appear as tweets in user timelines and also in the Who to Follow boxes you will see dotted around Twitter.

If your main concern is website traffic or goal conversions (email sign-up/sale), then this is your best bet. Twitter will serve your ad to people it thinks are most likely to engage with your ad. These ads will appear in user timelines and Twitter search result pages.

If you’ve got an app you want people to download, this is the ad type you want to use. App installs will only show up in mobile feeds.

Leads on Twitter campaigns are perfect for collecting leads, like email addresses. Perhaps you have an email course, free ebook, or something else you’re giving away in return for email addresses? The user doesn’t have to enter their email address which greatly improves the chance of conversion.

This is currently in BETA but this is simply to get people to watch your videos using Twitter’s native video player.

There are four steps to creating your Twitter ad:

The first step is very simple. Just choose a name for your campaign and decide when you want to the campaign to run. You can either choose it to start immediately and run continuously or you can set start and end dates.

Once you’ve chosen your ad objective and created the actual ad, it’s time to choose who you want the ad to be delivered to. Twitter has powerful targeting capabilities, which makes it easy to find and segment audiences.

Pick what areas of the world you want to target. I wouldn’t recommend choosing more than one country at a time. Be as specific as you need to be. If you’re only interested in working with companies in Edinburgh, for example, then only target Edinburgh.

Self explanatory – you can choose from Any Gender, Male only or Female only.

This field gives you the ability to target users who use specific languages.

You can target specific devices such as iOS, desktop and Android, as well as specific operating systems and specific mobile networks.

This is one of the best features of Twitter ads. Twitter allows you to target certain keywords, whereby, when someone tweets with that keyword, searches for it or engages with a tweet with the keyword, they become part of your target audience.

This is where you’re able to enter Twitter usernames and Twitter will target users who are similar to those users followers. You could include a list of your main competitors and advertise to their followers.

Twitter has a long list of interests you can target and Twitter will then serve your ads to people who have expressed interest in your chosen topics.

This feature allows you to create lists of users you have engaged with outwit Twitter, such as your email list or people who have visited your website. This is one of the most effective means of advertising as the people that you choose to target are potentially already ‘warm’ leads.

This targeting method allows you to target users who have engaged with specific TV shows, networks or other types of TV content.

Twitter allows you to target people based on behaviours of the users such as, purchasing habits. For example, ‘early tech adopters’. They combine internal data with data from third party sources.

Event targeting reaches people interested in global or regional events. You can browse their list of events, which ranges from the Super Bowl to common hashtags like #MotivationMonday

Similar to targeting customer audiences, you can exclude people from being served your ads. For example, you might want to exclude people already on your mailing list from seeing your ads asking people to sign up.

Just like, tailored audience exclusions, you’re able to exclude certain behaviour too. For example, if you’re selling milk, you might want to exclude “dairy free” behaviour from your targeting.

Once you’ve chosen your audience, you need to decide how much money you’re going to spend. You do this by setting a daily maximum. Twitter will cap the amount you spend each day to whatever you set it as.

You can also set a total budget, which will stop your campaign running once the budget has been hit. This is optional.

Under ‘Advanced settings’ you are asked to choose your pricing. You can choose between ‘Automatic bid’ and ‘Maximum bid’. In most cases, I’d just recommend going with automatic bidding. When paying for ads on Twitter, you pay per action taken (ie. a retweet or follow). If you choose automatic bid, Twitter will optimise your bid so that it gets the best results at the lowest price (within your budget).

If you choose Maximum bid, you are the one that has to choose how much you’re willing to pay for an action.

This is where you create what your ad will actually look like. What you see here will depend on what type of campaign you’ve set up.

In most cases, you’ll be asked to either ‘compose a tweet’ or ‘select a tweet’. This is entirely up to you. You can either create a brand new tweet for your ad, or you can choose one of your previous tweets to promote.

Once you’ve done that, you’re good to go! All you have to do is scroll back to the top of your screen and hit ‘Launch’ at the top right!

Congrats! You’ve set up your first Twitter ad! You’ll be directed to the analysts screen for that ad, which over time will show data on how many engagements the ad has had, how much you’ve spent along with data about who engaged with the tweet.

There’s no doubt that Twitter is still a great advertising opportunity for many businesses. Twitter ads are becoming more and more engrained in the news feed, meaning that it’s harder to differentiate from real tweets and promoted ones. That’s maybe not great for users, but it’s good for marketers!

I’d strongly encourage you to have a look at your Twitter strategy and consider adding in paid advertising. There’s a chance we may see Twitter going in the same direction as Facebook soon: pay to play.

If you have any questions about anything I’ve written about in this article, you can find me on Twitter @mrgavinbell or you can drop me an email and I’ll get back to you ASAP.

Note: This is an article I had originally written for UK Business Forums.