What is ClickFunnels? | An Honest Review 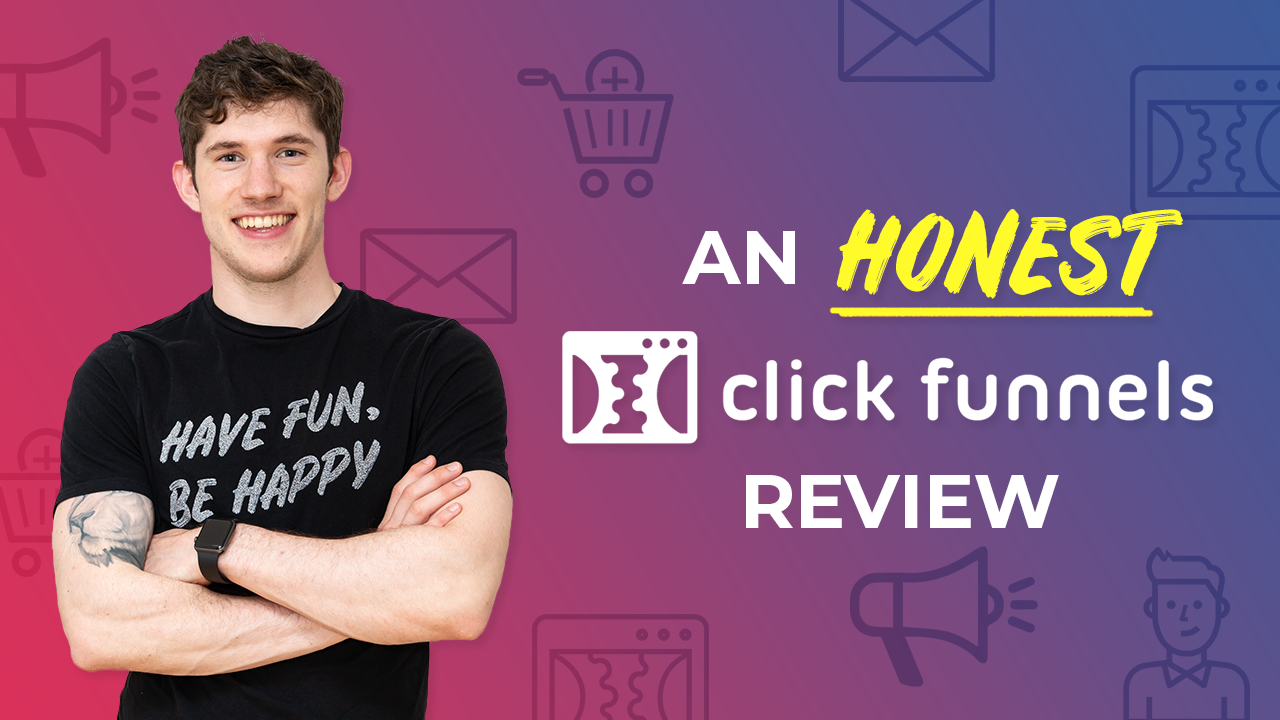 I’ve used ClickFunnels for a good few years now and I’ve experienced the good bits and the bad, but I felt like when I was searching online for ClickFunnels reviews, there were so many so-called impartial reviews which were all laced with people’s affiliate links. This one’s different.

Well in its most simple terms, ClickFunnels is simply a tool that you can use to build webpages online and those webpages can be anything you want, whether that’s a landing page for a product, a free guide or a page trying to get people to sign up for a webinar. It can be as simple or as complex as you want.

It’s very similar to the likes of wix.com, but it also has added features that are more tailored towards sales and marketing funnels so you can create memberships and checkout pages for example.

It’s not going to allow you to make millions overnight. It might if you have all the right ingredients, but there’s just as much chance as ClickFunnels allowing you to do that as any other tool that does the same thing.

If you’re the type of person (like me) who wants to create something quickly, doesn’t want to touch any code and you just wants something simple and easy to use that will allow you to have an output (i.e. a landing page or a funnel that looks and performs well), then ClickFunnels is probably going to be a pretty good tool for you.

There are a lot of good benefits to using ClickFunnels.

One of the main ones for me is just how easy it is to use. It’s a drag and drop builder so it makes it really simple to build a landing page.

So if you’re not a techy person or you’re not somebody that knows how to develop webpages or use things like WordPress.

Easy to experiment and split test

Another reason that ClickFunnels is a great tool to use is because it makes creating landing pages very fast and it’s really quick and easy to test things. I’m a split test geek, I want to try headlines against each other, I want to try different colours of buttons, a video versus an image and see which one performs best and I want to create those test environments easily and quickly.

ClickFunnels’ split test feature means I can create a landing page and then another one called a split test. I can then run traffic and people to each one and see very easily which one has then performed best.

With that you can also create new products, create a membership, create a course very, very quickly and try and market it and see if people buy it or not and if people don’t buy it you’ve not wasted a huge amount of energy, time and capital but, if people do buy it, then it’s great because you’ve got that system in place that’s bringing people in.

Integration with other tools

ClickFunnels integrates really nicely with other tools such as your CRM system or your email marketing system.

For example, I use ConvertKit and every time somebody signs up to my email list or downloads one of my free guides using a page in ClickFunnels, it immediately tags them in ConvertKit and splits them into a sequence. My email marketing works really flawlessly with ClickFunnels and integrating ClickFunnels with ConvertKit is literally the click of a button.

You can do whatever you want with the software. It is literally just giving you the tools to be able to create landing pages,  to integrate it with your email marketing, to create a course, a membership or to have automated email sequences go out.

ClickFunnels gives to you the tools to do that and the majority of them are in one place.

Reasons not to use ClickFunnels

Although the tool is easy, there’s going to be times when you need a little bit more help because something breaks, something doesn’t work or you don’t understand how to do something.

ClickFunnels has really, really bad support. If I’m being totally honest, you just can’t rely on ClickFunnels support whatsoever, so you need to use the tool understanding that if something goes wrong, you’re going to have to try and find the solution yourself or go to an external consultant.

I’m speaking from my own experience. When you go into the support feature of ClickFunnels, you’re not sent directly to a dedicated support team within ClickFunnels as you might expect. ClickFunnels actually allow users of the platform to reply to support queries.

The people that are answering those questions get paid to answer the questions, so it’s not a dedicated support team and you’re getting advice from people outside of ClickFunnels. If you have a real bad technical issue, you’re going to be waiting for some time before that gets escalated to the actual dedicated ClickFunnels support team.

Another reason that I’m not a big fan of ClickFunnels and I’ve already made a video on this is that their membership product really is terrible for a variety of different reasons.

I built my membership in ClickFunnels and, on the positive side as I mentioned above, it allowed me to create it very quickly and easily but we had so many issues with the actual membership product in ClickFunnels that I just had to leave and go over to WordPress.

There were serious security issues. People were getting into my membership without paying for example.

Also, the admin of members was really, really bad. Little things like the search feature which should allow you to search for members with specific emails didn’t work properly.

For these reasons, if you’re thinking of signing up to ClickFunnels for the membership product particularly, I would highly recommend you look elsewhere.

I still use ClickFunnels for my landing pages and sales pages occasionally and then when somebody signs up using ClickFunnels, I then add them to WordPress which works nicely, but using the actual membership feature of ClickFunnels isn’t the best option.

Another thing I would say with ClickFunnels is sometimes the software as a whole can feel a little bit clunky. Sometimes things go wrong, don’t work properly and overall the platform can just be a little bit glitchy.

At the same time I do understand that it’s just something that happens with online software so I won’t delve too deep into that but when you come across these things they do disrupt you.

ClickFunnels is relatively expensive compared to its competitors.

For example, if you’re just looking to create a very basic landing page for a free guide you’re giving away you could get Leadpages for $37 per month.

However, ClickFunnels does allow you to create a landing page, as well as the sales sequence after that landing page, which the likes of Leadpages isn’t very good for.

So it really depends on your goals. ClickFunnels could either save you money or it might be a little bit too expensive.

With that in mind, let’s talk about the pricing of ClickFunnels.

ClickFunnels offers a 14 day free trial so you can see whether or not it’s something that you want to utilise.

After that there are two packages.

With the $97 per month package you get access to pretty much all the features and it allows you to create up to 20 different funnels, which is going to be more than enough for the majority of people.

The $297 package, which actually at the time of filming has completely changed, used to give you access to the funnels, but you got access to unlimited funnels and you also got access to their tools, Actionetics, which are all around automated email marketing meaning that a separate email platform such as ConvertKit is not needed.

You also got access to Backpack, an affiliate marketing tool that you could use if you had a course or a membership.

Now they’ve just brought out FunnelFlix which gets you access to the $297 product allowing you to go and look at courses by various other people. It’s meant to be the Netflix for funnels. I don’t know a huge amount about it because it’s literally just come out at the time of filming, but it’s worth bearing in mind.

Is ClickFunnels worth the cost?

If you’re simply looking for a landing page builder then I would advise looking at something like Leadpages or even Mailchimp – something that’s just super simple and super cheap.

If you’re looking to build an actual funnel and you want to have checkout pages, to sell products, take people through a flow such as from a.landing page for a lead magnet to a thank you page etc, or if you have a membership product, then ClickFunnels is going to be worth the cost.

So I want you to ask yourself how much are you going to be using it and what are you using it for?

That should help you decide if you’re going to make a return on investment. If you’re simply using it to give people your free guide and you’re not getting people to buy from you from that free guide, then ClickFunnels is probably not the best product for you.

If you have a specific plan on how you’re going to turn people that are downloading your free guide into customers, then it probably will be worth it.

But I want you to understand that it’s just a piece of software. It’s just a tool and it’s not the golden bullet.

My final thoughts on ClickFunnels are it’s a great tool. I’ve used it for years and I highly, highly recommend it. It’s the tool that we use in the agency when we build funnels for clients and I wouldn’t recommend it to clients if I didn’t believe in it.

But the main thing here is to understand how ClickFunnels can play a part in your business and you need to look at all the other tools that are available to you like Leadpages, Unbounce and Mailchimp.

That’s when you can make a decision based on logic rather than emotion.