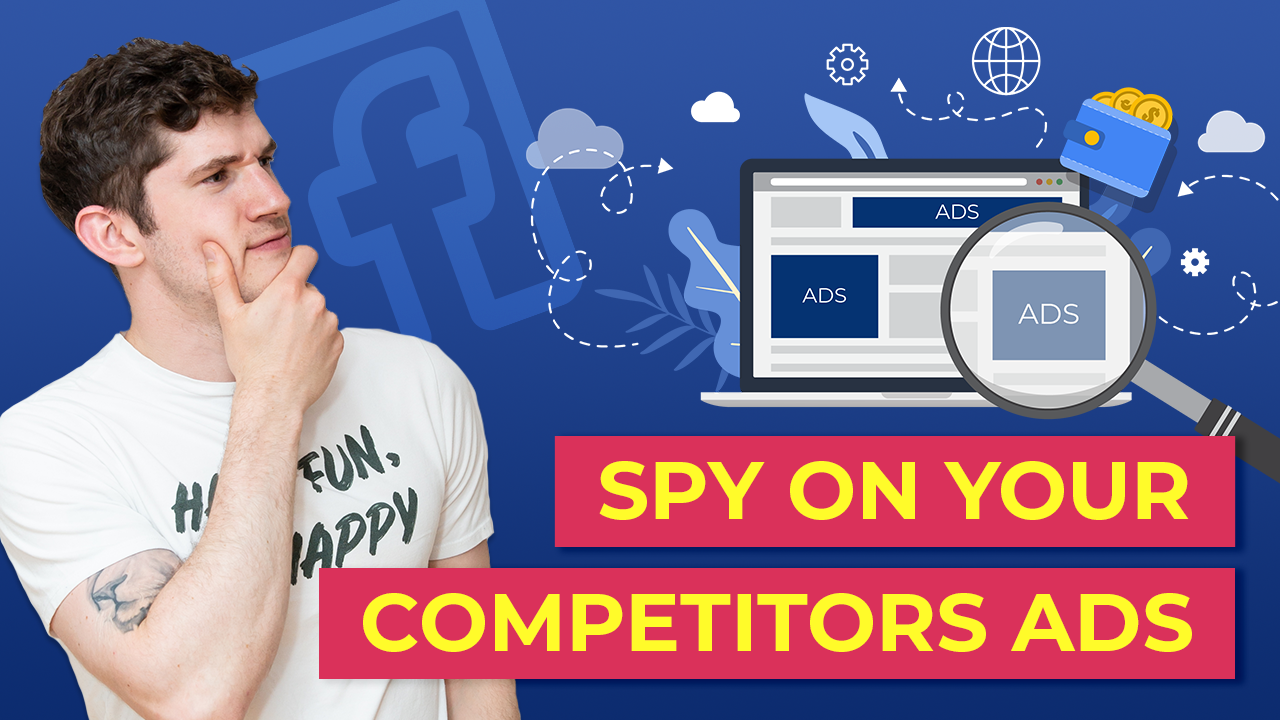 In this video I’m going to share all the methods you can use to spy on your competitors’ Facebook ads.

There’s three reasons that you might want to do this…

1. Keep an eye on the competition

It’s good to understand what your competitors are up to, because it means that you can look and spot for different opportunities in the market.

Another reason to keep an eye on your competitors Facebook ads is that you can see what’s working and what’s not working.

If you can see that your competitors are running Facebook ads and they’re getting a ton of engagement, then you might look to implement something similar yourself.

On the flip side you can also see when something’s not working.

3. See which offers your competitors are leading with

Thirdly, you can see which offers your competitors are leading with.

One of the hardest things in Facebook ads is to get the right offer, to create an offer that people are genuinely interested in and want to take you up on.

Maybe your competitors are trying 30% off, whereas you’re only doing 20% off. Or maybe they’re doing free shipping and you don’t offer free shipping.

We might have the best service, the best testimonials, but if they’re leading with an offer that’s better than ours, they will likely have more success.

So it’s important for us to know which offers our competitors are leading with so we can counteract that.

But also if we certain offers are working, then we can maybe steal those offers and use them in our own business.

How to spy on your competitors ads

Let’s use the example of Buffer, a social media scheduling tool but this works for any type of business.

Let’s pretend that we’re Buffer and Buffer are trying to look at their competitors. One of the things that I would look to do initially, is go onto Google and type in social media scheduling, because this is the space that Buffer operate in.

I’d look at the competitors that are running Google ads and if somebody is running Google ads, typically it suggests that they understand paid advertising and they’re probably going to advertise on Facebook as well.

The next step would be to head to the competitors’ Facebook pages and look at the content that they’re producing.

This is the method number one for finding out what type of ads your competitors are running. You’re not just looking at the ads, but at the content. In this instance Hootsuite, Later and Sprout Social, these are the three examples of Buffer’s competitors I’m using here.

Looking at Sprout Social’s Facebook feed I see that the majority of the content that they’re producing is just links to articles, and it looks like the links to the articles aren’t actually going straight to Sprout Social’s site.

So what they’re doing is curating content from different places on the internet, sharing that with their audience and it’s not getting much engagement because, let’s face it, it’s not great method.

When I come to Hootsuite’s profile, immediately I see that they’re getting more engagement. Now, Hootsuite obviously have a much larger audience than Sprout Social, but we still want to take a look at the types of content they’re producing and find what works and wha doesn’t.

To be honest, it looks like Hootsuite are doing similar stuff to Sprout Social and they’re just sharing content onto their feeds.

Later, the third competitor of Buffer that I found also have quite a lot of promotional, sales-based pieces of content in their Facebook feed.

Now one thing to say is that Later are promoting their own content, as opposed to Sprout Social and Hootsuite who are trying to get people to go to different sites. So I would say that Later are probably the best here.

But what this says to me is there’s a massive opportunity for Buffer to go and create really nice, high-quality video content or start live streaming every single week, because Sprout Social, Hootsuite and Later’s content is frankly not very good.

So that’s step number one, taking a look at the content and seeing what’s working and what’s not.

Another way to spy on your competitors’ ads is to head over to their website and see whether or not they have the Facebook Pixel installed. (If you want to know how to set up your own Facebook pixel there’s a blog all about that here).

If they do we know that they’re advertising on Facebook now or they’ve advertised on Facebook in the past. Otherwise they wouldn’t have the tracking in place there.

I’ve got a Google Chrome extension called Pixel Helper. You can download this for free and it lets you know whether the Facebook Pixel is installed on a website or not.

I can see that all three of Buffer’s competitors have the Facebook Pixel installed which suggests that they are advertising on Facebook.

This is maybe slightly biased, because these business are all in the social media space but you’ll probably find that not all of your competitors have the Facebook Pixel installed, so it’ll give you a really good understanding of who’s advertising and who’s not.

If someone is advertising but they don’t have the Facebook Pixel installed, it suggests that they don’t know how to advertise properly and they’re not properly tracking conversions which is then a massive opportunity for you.

The third and final way that we can find out and spy on our competitors’ ads, and this is by far the best way to do it, is by using the Facebook Ads Library.

This is something that became available to us a few months ago and it’s a place where we can go in and type in our competitors’ Facebook page name. We can then see every single ad that they’re running.

We can look at things like the copy, the creative, the imagery that people are using and we can see where they’re sending people which means we can go and look at their funnel.

We can look at their offer, we get a wide picture of every single thing that they’re doing from a Facebook ad point of view.

Once you’ve got to grips with taking inspiration from your competitors ads, you might want to read this blog: Facebook Ad Targeting | 3 Audiences You Need to Know About.